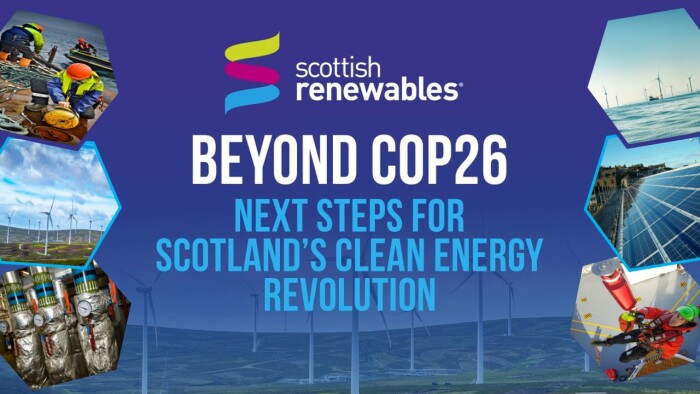 Industry body Scottish Renewables has today (November 4) launched a new publication which outlines future steps The Scottish Government should take to deliver a lasting legacy for the energy transition.

The body represents around 265 member organisations working across all renewable energy technologies including wind, solar, wave and tidal, hydro and more, which now provide the equivalent of 97.4% of the electricity consumed in Scotland.

The paper, Beyond COP26: Next steps for Scotland’s clean energy revolution, launched on Energy Day at the 2021 United Nations Climate Change Conference, sets out five key recommendations The Scottish Government should action to accelerate the pace of the transition to a net-zero society and advance Scotland’s position as a world leader in low-carbon energy.

“The challenges facing our environment have never been greater and the discussions currently taking place in Glasgow at COP26 will be critical in shaping the future of our planet.

“A lot of the work around COP26 and the negotiations is already hugely positive with new agreements like the commitment to halting and reversing forest loss and land degradation by 2030 already emerging, what we need now is a plan of action on how we are going to secure global net-zero and keep 1.5 degrees within reach.

“Scotland is already a world leader in renewable energy and has some of the most ambitious climate change targets in the world, but there’s more to be done.

“The recommendations set out in this publication outline ways in which our renewable energy industry could continue to grow and support Scotland’s economy and climate ambitions.

“With our offshore wind aspiration set at 11GW, and the potential of an additional 12GW of onshore wind by 2030, Scotland needs a planning system which meets our ambitions. All future developments and ambitions need to be guided by net-zero and the climate emergency.

"The rapid decarbonisation of our heat sector is also essential; heat currently makes up 55% of Scotland’s energy use and only 6.4% of that heat comes from renewable sources.

“Harnessing our daylight hours by installing solar energy systems on all suitable public and commercial buildings will allow us to produce clean electricity, powering electric vehicle fleets and heat across the country.

“Our world-leading wave and tidal energy industries can provide a predictable, low-carbon, local energy source too. Continuing the development of marine energy projects will play a key role in achieving net-zero islands and coastal communities which are generally using high carbon fuel sources for heat and transport and are impacted by limited grid capacity.

“The deployment of these technologies presents an attractive global export opportunity for Scotland’s renewable energy sector, and we believe the government should establish a target for the export of energy skills and services and set our global ambition for how we can help lead nations around the world on their net-zero journeys.”

“Scotland’s renewable energy sector is a vital part of the country’s economy, bringing billions of pounds of investment and supporting thousands of jobs in some of our most remote regions, as well as offsetting billions of tonnes of carbon every year and it’s vital that Scotland’s politicians continue to support it.”