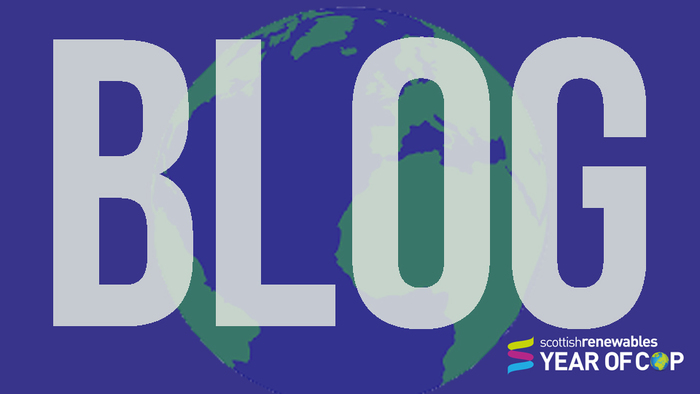 The arrival of COP26 in Glasgow in November means the eyes of the world will be on Scotland – and in particular its progress on cutting carbon emissions to date. With more than two decades of real climate action under its belt, the country has plenty to shout about.

And as the rest of the world begins its own decarbonisation journey the renewable energy skills, knowledge and technologies which Scotland has developed are hot property.

This second blog in Scottish Renewables’ Year of COP series looks at some of the companies who’re already making hay.

Scotland has more than tripled its renewable energy capacity in the past ten years.

Last month we learned that the country had narrowly missed a target of generating the equivalent of 100% of the nation’s gross electricity demand from renewables.

But with analysts predicting this goal will be reached ahead of COP26 in November, Scotland has a lot to shout about.

After all, the country has signed up to some of the world’s most ambitious climate change criteria and has a legally binding commitment to reach net-zero emissions by 2045.

“In the past 10 years we have more than tripled our renewable electricity output. Renewable energy projects are displacing tens of millions of tonnes of carbon every year, employing the equivalent of 17,700 people and bringing enormous socio-economic benefits to communities across the country.”

It is progress that sets Scotland on an irreversible path towards net-zero, the benefits of which could be felt far beyond our shores.

A survey of Scottish Renewables members carried out prior to the pandemic revealed Scotland’s renewable energy expertise is being put to work in 72 countries, with Scottish businesses employing staff in 22 of those. More than half of the survey’s respondents said they were actively moving into new markets.

The intention, it would seem, is to share our renewable know-how with the world.

It doesn’t take long to unearth what Scotland does well.

Scott McCallum is a partner at Shepherd and Wedderburn and part of the law firm’s well-established consenting team. He says:

“Our role is to help developers and operators achieve fit-for-purpose consents that are as bullet-proof as possible in terms of legal challenge.”

His crisp synopsis barely hints at the significance of the consenting process, which encompasses all applications to build, operate and modify energy installations. But even in these preliminary phases, Scotland has seemingly honed a framework on which renewable projects can flourish.

“Consenting is inherently a political process. So your starting point for any consent regime is having a strong policy framework. In Scotland, we've benefited from a long period of fairly consistent political messaging and policy that renewable energy is a necessary part of our energy mix. Over the years, that’s just got stronger and stronger.

“I believe strong policy support is something we've done well and is something other countries could replicate.”

He acknowledges that other countries are starting to look to the UK in order to gauge what has worked and what hasn't, with the USA and the Far East – particularly Japan – being good examples.

But while a strong policy stance is important, he says the most significant export Scotland can offer is its accumulated wisdom.

“There are some significant environmental barriers to consenting in the UK, such as impacts on birds, which have been controversial in recent years. In that regard, we're probably ahead of the game in terms of our thinking and how that has fed through into the consenting regimes and the conditions applied. As a result, many environmental consultants have exported their knowledge of the Scottish and UK consenting regimes to countries looking to bolster their experience in this area.”

Scotland’s pioneering consenting regime is a product of years of trial and error. The incessant tweaks and refinements might have been arduous, but they’ve produced an effective structure that others are seeking to replicate.

“We’ve been to the highest court in the land with renewables projects – several times actually – and we bear the scars to prove it. However, on the positive side, we now have systems than can deliver consents for highly complex and sometimes controversial infrastructure projects. Our consenting processes have been knocked into shape along the way.

“What’s more, there is a real sense that participants on all sides are looking for dialogue now, rather than suffering frozen assets in draughty courtrooms. Maybe it’s a rite of passage for every jurisdiction to go through, but we’re here and happy to share our war stories and the lessons learned along the way.”

But Scotland does more than export ideas.

Scottish firms are breaking new ground with new technology every day. Some examples include:

As if to emphasise the international nature of Scotland’s offering, a team in Stirling has developed and is proactively deploying a Geographical Information Science (GIS) system that accurately assesses potential onshore windfarm locations internationally.

Miles McConville, Project Manager at Fred. Olsen Renewables, has been instrumental in establishing the system and believes it can help replicate what the team has already achieved in Scotland, where Fred. Olsen Renewables boasts an unblemished record of gaining 10 project consents, including involvement in the first consented wind farm in Scotland.

“As a group, we know what makes a good wind farm. Using this knowledge, the team in Scotland set up a GIS model that brought together different spatial data sets that could be analysed and used to create visualisations to help identify wind farm opportunities.

“The model allows us to replicate the same process in other countries, gathering relevant data in order to identify the opportunities we are now bringing forward.”

Interestingly, the team followed a route to market that avoided economies offering subsidies and concentrated instead on those reliant on fossil fuels, where the transition to renewables would be most acute. Following a pain-staking process, they settled on 20 possible sites in Italy, Miles explains:

“In-house, we’re able to assess the merits of a particular site before we’ve even spoken to the landowner, so there's a higher degree of competence built up right from the word go. That’s industry leading, and it’s the approach we’ve applied in Italy.

“What’s really fascinating is the country director in Italy has two decades of experience and has consented and built out hundreds of megawatts. For him, this is brand new. He's never experienced it before and finds it revolutionary working with the system we developed.”

To make this possible, the team took inspiration from what they had already achieved.

“It's really what we did in Scotland that gave us the confidence to put renewables at the core of our future business.”

They say actions speak louder than words. With this in mind, Scotland’s renewable sector is applying its accrued knowledge and hard-won wisdom at both a practical and legislative level at home and abroad.