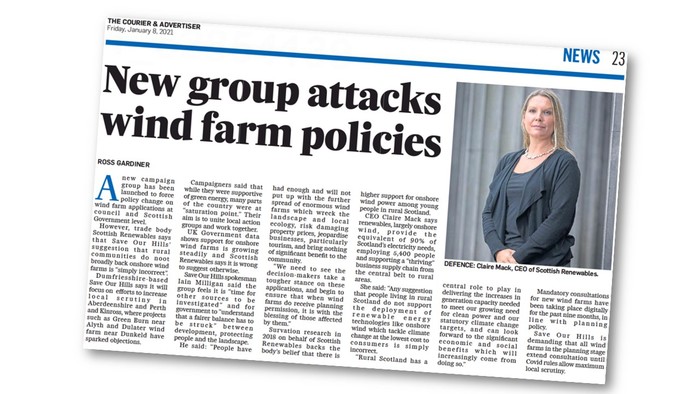 A new group, Save Our Hills, has been launched to "mount a nationwide appeal to bring together communities fed up with large-scale windfarm developments in their local area".

In order to correct perceptions around rural Scotland and onshore wind SR has issued the following statement:

“Any suggestion that people living in rural Scotland do not support the deployment of renewable energy technologies, like onshore wind, which tackle climate change at the lowest cost to consumers is simply incorrect.

“The latest UK Government figures show that only 10% of Scots are opposed to the development of onshore wind, and it is misleading to suggest otherwise.

“The UK Government’s data are supported by further research, carried out specifically in rural Scotland, which additionally showed higher support for onshore wind power among young people. That is particularly important in light of The Scottish Government’s confirmation that our robust planning system will now ‘be driven by the overarching goal of addressing climate change’.

“Renewables now provide the equivalent of 90% of Scotland’s electricity consumption, with onshore wind delivering the bulk of that power, employing 5,400 people across the country and supporting a thriving supply chain of businesses from the central belt to the Borders, Highlands and Islands.

“Rural Scotland has a central role to play in delivering the increases in generation capacity needed to meet our growing need for clean power and our statutory climate change targets, and can look forward to the significant economic and social benefits which will increasingly come from doing so.”