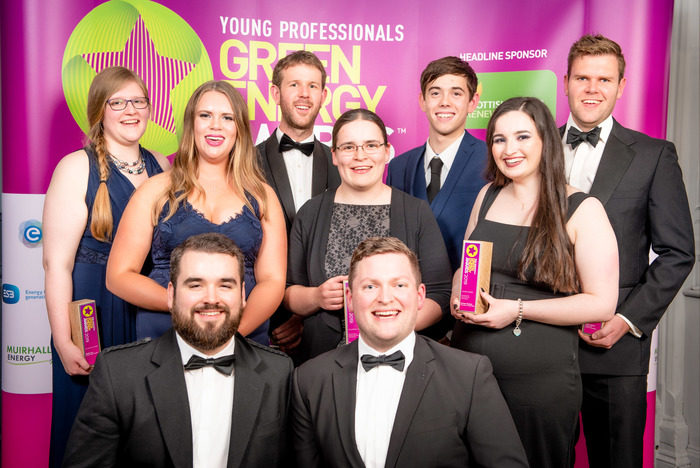 Winners include Hazel Smith from the University of Strathclyde, whose work on monitoring offshore wind construction noise is already being implemented by Scotland’s £511-million-a-year industry.

She joins eight others in receiving accolades at the Young Professionals Green Energy Awards, which were held at the Grand Central Hotel in Glasgow.

Recognition also went to Daniel Coles from Simec Atlantis Energy, who won the Analyst Award for his work in optimising MeyGen: the largest tidal power station in the world. Its turbines now produce 20% more energy thanks to Daniel’s efforts.

The University of Strathclyde’s Hannah Houston took home the Judges Award for her development of a pioneering interactive Wind Energy Project, which brought together students from Glasgow, Strathclyde and Caledonian universities to consider all aspects wind farm planning.

The winners were selected from a shortlist of 39.

“Once again the Young Professionals Green Energy Awards bring the renewables industry together to recognise the contributions being made by its upcoming leaders.

“The standard of talent showcased by all of our shortlisted entrants is truly inspiring.

“The skills, professionalism and passion shown by tonight’s winners demonstrate their commitment to their careers. I encourage them to maintain the same determination as they grow and develop to shape the future of the renewables industry.”

ScottishPower Renewables was the headline sponsor of the 2019 Young Professionals Green Energy Awards.

“The level of talent showcased at the Young Professionals Green Energy Awards this year has been exceptional and I’d like to pass my congratulations on to all of the worthy winners.

“Renewable energy has a vital role to play in the decarbonisation of our country and in particular achieving the bold target of Net Zero. With the talent that has been on show this evening, I’m proud to say that the future of our industry is in very safe hands.”

Guests also heard from finalist Blair Cruickshank from ScottishPower Renewables, who was invited to speak about his role in setting up an LGBT+ network and the positive impact this has had in supporting his colleagues in the workplace.

Next year’s Young Professionals Green Energy Awards will feature a new category, the Culture Change Award, which will give recognition to people who change the culture of their organisation for the better.