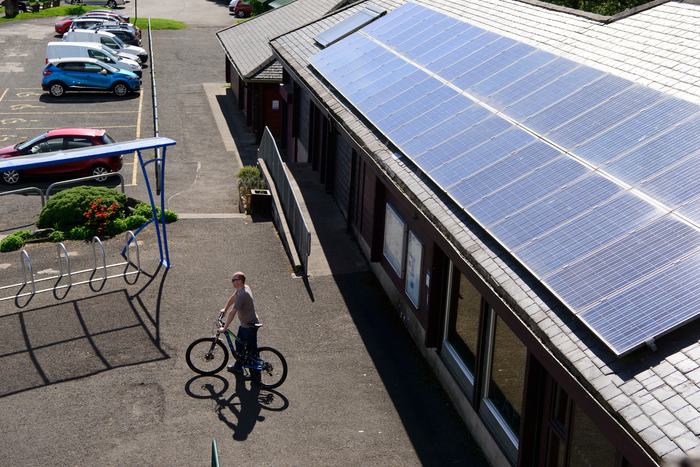 Changes to UK Government support for small-scale renewables this week (March 31) will hit a sector which has installed the equivalent of 360,000 solar panels in Scotland every year since 2010.

Those panels would make up 22,500 standard household solar power systems, worth £150 million.

More than 700MW of small green power schemes have been installed by homeowners and businesses since the start of the Feed-in Tariff in 2010, analysis by Scottish Renewables has shown.

On average, every year that deployment could equal:

Currently, small-scale renewable energy projects like these require government support, as well as a way to sell the power they produce. The end of the Feed-in Tariff this month (March 2019) will make financing those projects difficult, meaning the future for the sector “remains bleak”.

Hannah Smith, Senior Policy Manager at Scottish Renewables, told how the scheme, through which household and business-scale green energy is backed, has been

“Small-scale renewable energy has produced enormous benefits for the UK: it’s allowed homeowners, businesses and communities to take control of their energy supply, reducing their bills and carbon emissions.

“These projects have performed another role, too: they’ve educated people about the importance of energy and the impacts of its generation on the environment. The rooftop solar panel is now commonplace on streets across Scotland and has made home energy generation mainstream.

“The end of the Feed-in Tariff at the end of this month (March 31) will mean, at best, a period of enormous uncertainty for the companies that install these projects and for the people who work for them.”

Businesses which have already been hit by cuts to support provided by the Feed-in Tariff include:

Glasgow-based Gaia-Wind, which went into administration in March 2018

Solar firm Renewables Solar (UK), which went into liquidation in 2017 with the loss of 28 jobs.

Government is currently considering how small renewable energy schemes will be paid for the electricity they generate in future through a new ‘Smart Export Guarantee’ scheme.

“Though Government has launched some proposed market mechanisms for electricity exports, for the majority of technologies the Feed-in Tariff supported, the future remains bleak.

“Without government action to safeguard these technologies and the benefits they can bring, the end of this tariff could spell the end for a sector which has an important role to play in our drive towards a decarbonised smart energy system.”