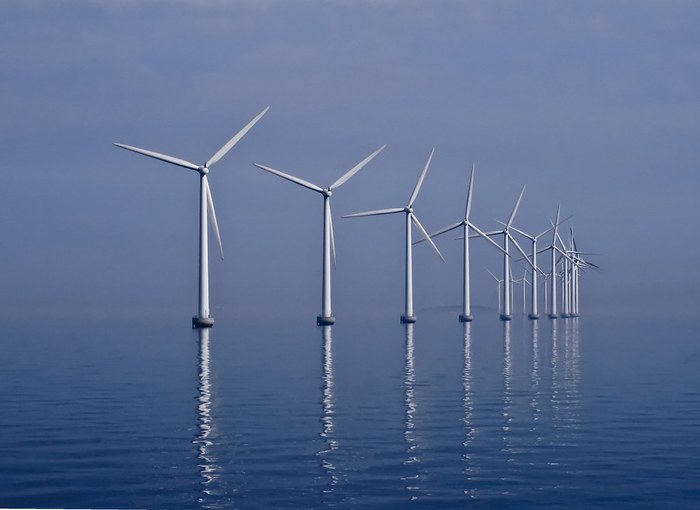 Everyone in renewables should know by now that Scotland’s energy landscape will be transformed by ScotWind.

The numbers are huge: 17 offshore wind projects, 25GW, up to £24.9 billion of planned investment into the Scottish economy.

Crown Estate Scotland’s Supply Chain Development process is a goldmine of information for potential suppliers, setting out planned spend and where that money will be invested.

Hettie Pike, our Policy Research & Support Officer, has crunched the numbers and created easily-accessible graphics to give members the inside track on the commitments which have been made to date.

Details from the SCDS process, announced by Crown Estate Scotland in April, outlined up to £24.9 billion of planned investment into the Scottish economy across the 17 ScotWind projects - equivalent to £1 billion for every gigawatt of capacity deployed, from a total offshore wind capacity of 24.81GW.

SR analysis of the SCDS data (detailed in this blog) has shown that potential collaborations and external investment could see the most ambitious scenarios deployed by developers, raising this to £1.4 billion per gigawatt – a truly transformational sum for the Scottish supply chain.

Those 17 wind farms, both floating and fixed, could cover up to 7,000km2 of the Scottish seabed. The clean green renewable energy that these wind farms will provide would give a game-changing boost to the plans to turn Scotland’s energy sector fully electric and push for net-zero.

Following the news of the signatories to the Scottish Offshore Wind Energy Council’s Collaboration Framework the publication of the ScotWind Supply Chain Development Statement Outlooks (SCDS), Scottish Renewables takes a look at what ScotWind could mean for the Scottish offshore wind supply chain.

The total financial investment detailed by projects in the SCDS across the 17 projects is £66 billion, of which £25 billion (37%) is ring-fenced for spend in Scotland (fig. 1). 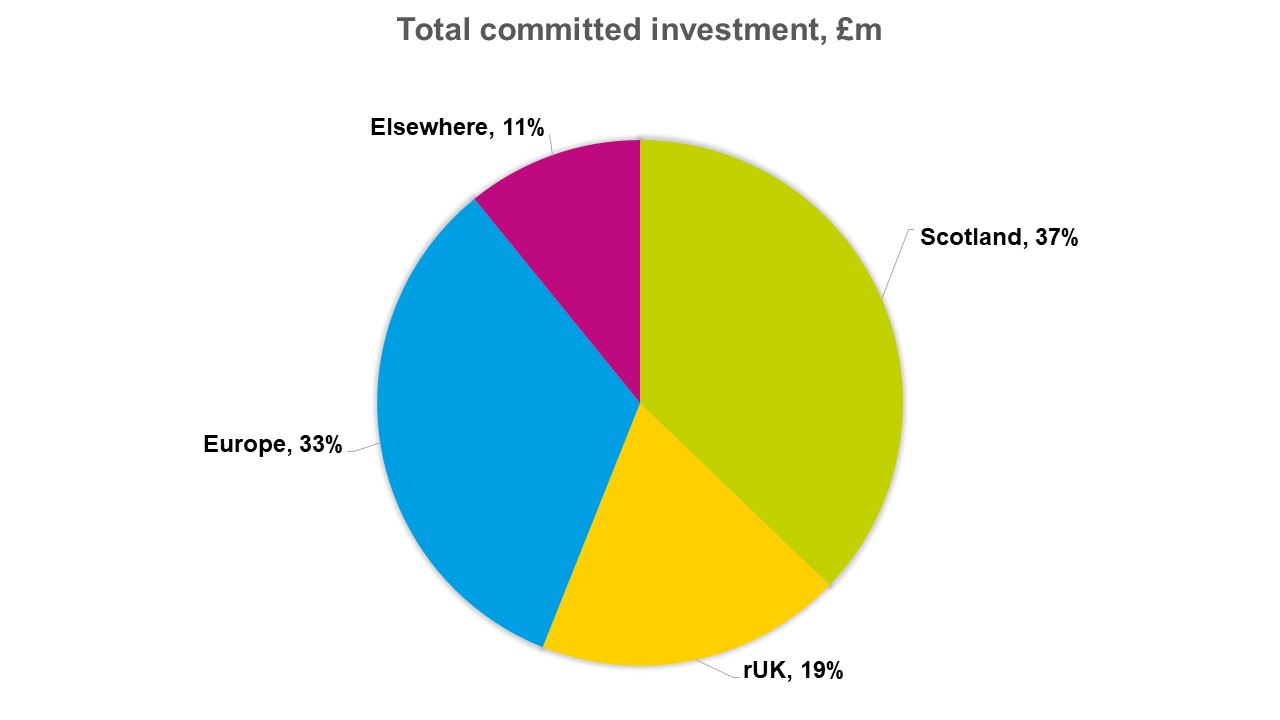 Eleven of the 17 projects will be using floating wind turbines and more than 77% of the £25 billion invested into Scotland will be dedicated to floating wind, firmly placing Scotland as global leaders in this developing technology. 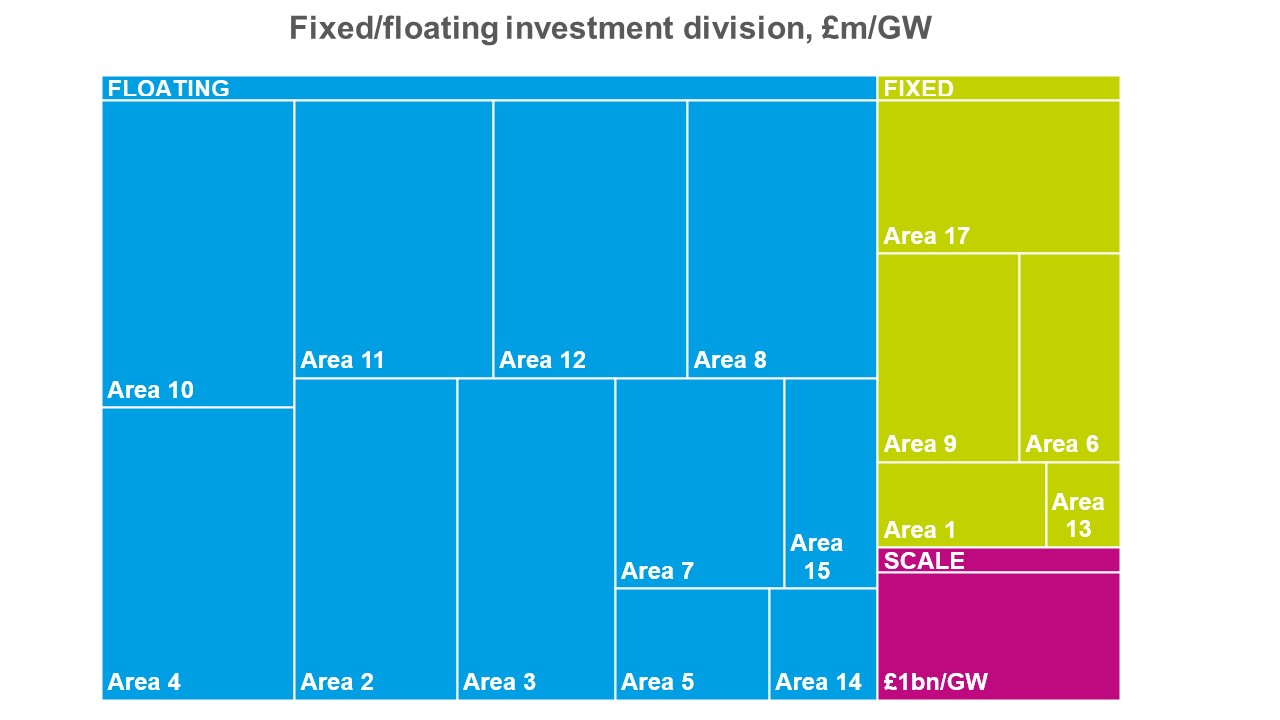 Figure 3: The division of expenditure between the four main investment sectors.

Figure 4: The distribution of expenditure between the four main categories of spending for the 17 project per proposed gigawatt of their site. This is a map distribution of the developments and a summary table is provided at the end of the blog. 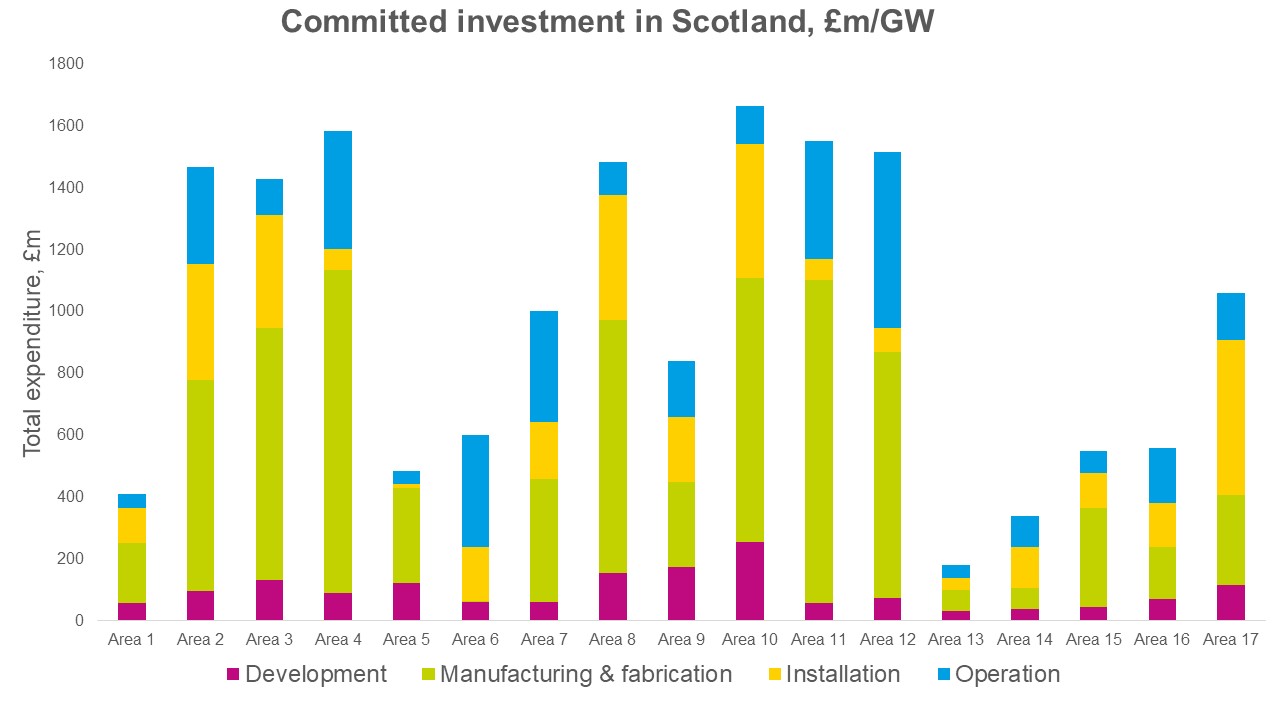 Below summaries the additional planned investments pledged by the 17 ScotWind bids. Commitments are split into the five main categories mentioned in the bids that will supply additional investment into Scotland.

Ports play a central role in delivering offshore wind projects, and nine out of 17 of the developments have stated that they will contribute additional investment into the evolution of crucial ports.

Bids have acknowledged the carbon impact of some materials, with select projects promising to use concrete alternatives with a carbon footprint 16 times lower than traditional concrete. Others have pledged to avoid steel, which will be in huge demand during the development of these 17 projects.

Online portals, which connect suppliers with developers, were suggested by six different developers. While these portals have potential, suppliers face a challenge in staying up to date with multiple supplier registrations. If one portal were to be created in collaboration with all project developers- driven by the Collaboration Framework- this would open the market and create a streamlined approach to supply chain connections.

The ScotWind development introduces challenges, requiring a skilled labour force to carry out these substantial plans. In response to this, 12 out of the 17 successful bids have included plans to increase renewable energy education. These educational initiatives include engaging schoolchildren in STEM subjects, creating qualifications which provide transferable skills for a renewables career and up-skilling existing workforces in alignment with the just transition.

Charlotte Stamper, Senior Policy Manager of Offshore Wind & Marine at Scottish Renewables, told how developers must now work together to ensure Scotland’s growing supply chain gets the most from ScotWind:

“The SCDS demonstrate great commitment from the ScotWind developers to maximising the economic benefit of their projects locally. There is a vast amount of work to be delivered which needs to begin sooner rather than later to secure plans and avoid logistical issues that would arise if the majority of developers began work in parallel, attempting to employ the same suppliers. A failure in collaboration between developers, and a lack of preparation across the Scottish supply chain, could once again see Scottish jobs outsourced to overseas production.

“It is vital that the SCDS of the individual projects begin to come together. Many of the commitments overlap and it is only with collaboration that turning ambition into reality will be achievable. Without this collaboration Scotland could miss out on a potential £1.4 billion of investment per gigawatt.

“The resubmission of these successful bids in 12 months’ time to finalise the commitments is essential in securing Scotland’s future as a global leader in renewable energy and ensuring the Scottish supply chain is at the forefront in benefitting from this huge industrial revolution.”

Figure 5: A map to show the distribution of the 17 projects across Scotland. Map sourced from the Crown Estate Scotland website. 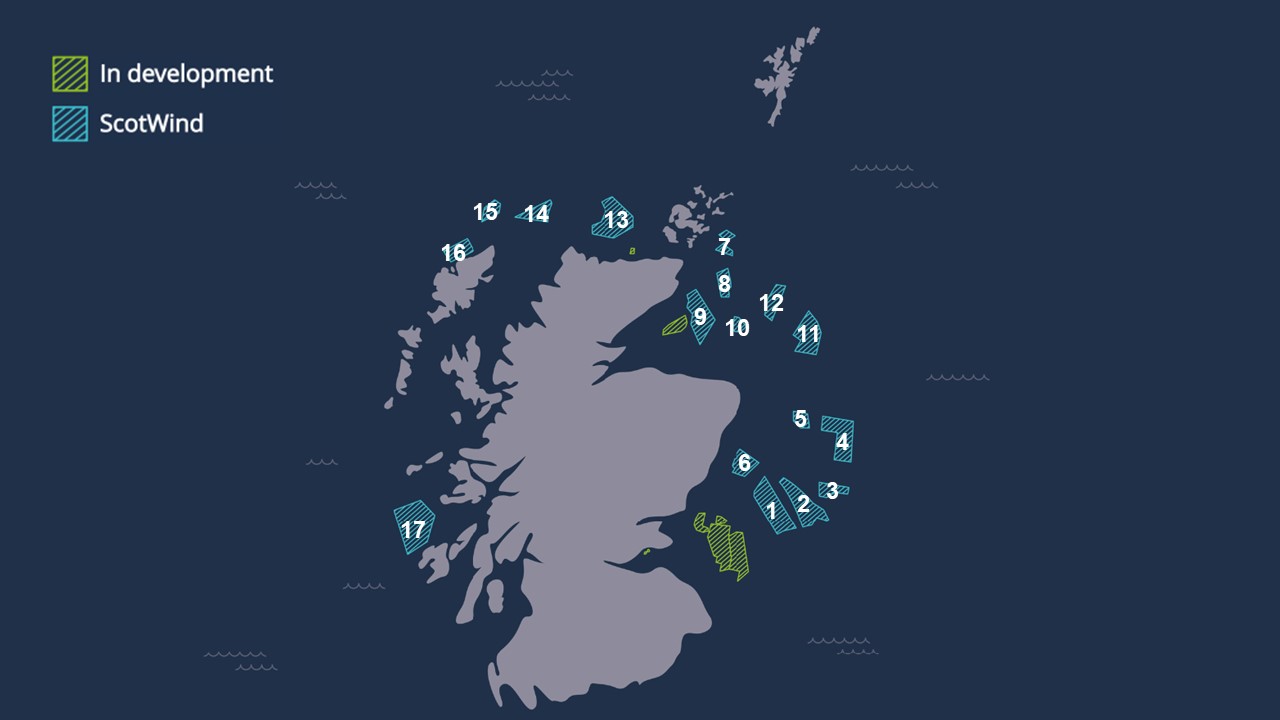 Table 2: A summary table of the projects, committed supply chain investment and GW capacity and additional pledges from the 17 projects. 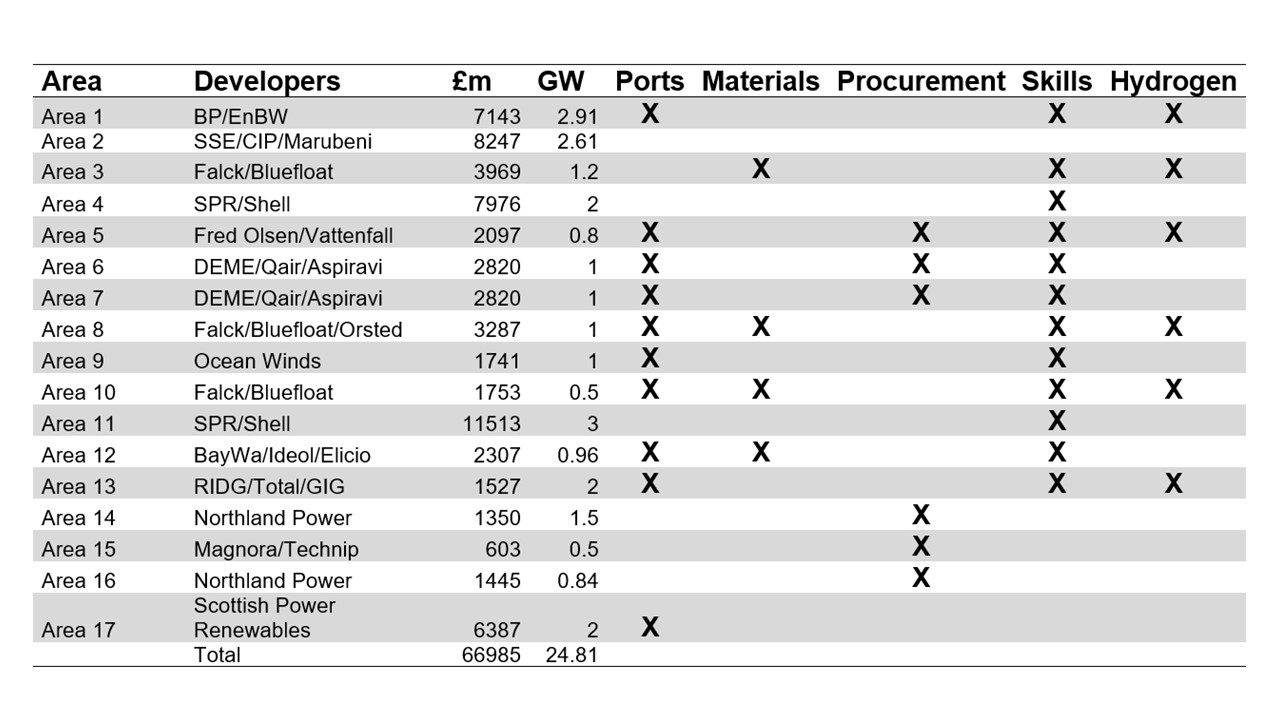