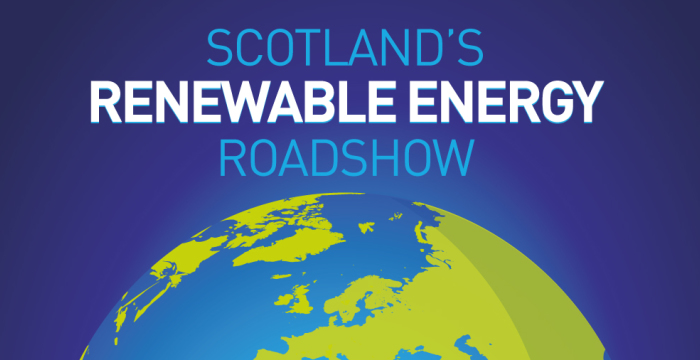 Scotland’s Renewable Energy Roadshow will tour the country this summer and highlight the positive impacts renewable energy has on local communities, the economy and the country’s fight against climate change.

The interactive Roadshows will inform the public about an industry which contributes £5 billion to Scotland’s economy each year as well as about COP26, the United Nations climate change conference which is coming to Glasgow in November.

Locations including Dornoch, the Cromarty Firth, Dumfries, Lochgilphead and Pitlochry will be visited by the events.

The events will be delivered by Scottish Renewables as part of its Year of COP campaign alongside Partners Crown Estate Scotland, EDF Renewables, Kensa Contracting, SSE Renewables & Worley.

“Scotland is a world leader in renewable energy and has some of the most ambitious climate change targets in the world.

“The renewable energy industry is as a vital part of the country’s economy, bringing billions of pounds of investment and supporting thousands of jobs in some of our most remote regions, as well as offsetting billions of tonnes of carbon every year.

“COP26 is a huge opportunity for us to showcase these successes to the rest of the world and show that we have the skills and tools they need to decarbonise their energy systems.

“But it’s imperative that our people know how valuable this industry is to Scotland, and Scotland’s Renewable Energy Roadshow will show just that, reaching the people in the heart of the communities most involved in delivering meaningful change.

“Our series of events will visit the local communities that are home to innovation-driven businesses which have some of the country’s most impressive renewable energy technologies and highlight just how important these are as we work towards net-zero.”

The Roadshow dates and locations are: