Warning that levy on renewables could increase bills 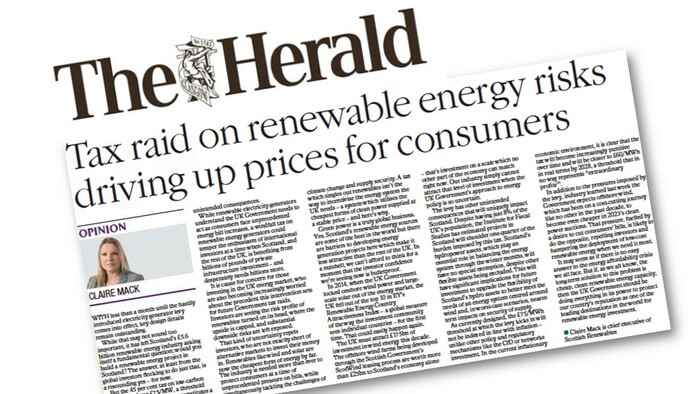 This article first appeared in the Herald print edition on December 22, 2022

With less than a month until the hastily introduced Electricity Generators Levy comes into effect, key design details remain outstanding.

While that may not sound too important, it’s left Scotland’s £5.6 billion renewable energy industry asking itself a fundamental question:  Would you build a renewable energy project in Scotland?

The answer, at least from the global investors flocking to do just that, is a resounding yes – for now.

But the 45% tax on low-carbon generation above £75/MW, a threshold the UK Government believes constitutes a ‘fair’ return, will have far-reaching unintended consequences.

While renewable electricity generators understand the UK Government needs to act as consumers face unprecedented energy bill increase, a windfall tax on renewable energy generators could temper the enthusiasm of international investors at a time when Scotland, and the rest of the UK, is benefitting from billions of pounds of private infrastructure investment – and desperately needs billions more.

It is cause for concern for those investing in the UK energy market, who are also becoming increasingly worried about the precedent this intervention sets for future Government tax raids. Investors are seeing the risk profile of renewables turned on its head, where the upside is capped, and substantial downside risks are left exposed.

That kind of uncertainty repels investors, who are not exactly short of alternative markets to invest their money in.

Renewables like wind and solar are now the cheapest form of energy by far. The industry is needed more than ever to protect consumers at a time of unprecedented pressure on bills, while simultaneously tackling the challenges of climate change and supply security. A tax which singles out renewables isn’t the way to incentivise the energy system the UK needs - a system which utilises the cheapest forms of clean power supplied at a stable price - and here’s why.

Green power is a truly global business. Yes, Scotland’s renewable energy sources are some of the best in the world but there are barriers to developing energy generation projects here which make it less attractive than the rest of the UK. In a nutshell, we can’t afford to think for a moment that the investor confidence we’re seeing now is bulletproof.

In 2014, when the UK Government locked onshore wind power and large-scale solar out of the energy market, the UK fell out of the top 10 in EY’s Renewable Energy Country Attractiveness Index – a global measure of the way the investment community sees individual countries - for the first time. That could easily happen again.

The UK must attract £175 billion of investment in wind energy this decade. The offshore wind farms being developed through the Scottish Government’s ScotWind Leasing process are worth more than £25 billion to Scotland’s economy alone – that’s investment on a scale which no other part of the economy can match right now. Our industry simply cannot attract that level of investment when the government’s approach to energy policy is so uncertain.

The levy has other unintended consequences that will uniquely impact Scotland. Despite having just 8% of the UK’s population, the Institute for Fiscal Studies has estimated projects in Scotland will shoulder a quarter of the burden imposed by this tax. Scotland’s hydropower assets, which play an essential role in balancing the energy system through the winter months, will have no special exemption, despite other flexible assets being excluded. This will have significant implications for future investment to upgrade the flexibility of Scotland’s hydro assets to better meet the needs of an energy system centered around wind and, in worst case scenarios, nearer term impacts on security of supply.

As currently designed the £75/MWh threshold at which the levy kicks in will not be indexed in line with inflation – unlike other policy and regulatory mechanisms like the CfD or networks investment. In the current inflationary economic environment it is clear that the tax will become increasingly punitive over time and will be closer to £60/MWh in real terms by 2028, a threshold that in no way represents ‘extraordinary profits’.

In addition to the pressures imposed by the levy, industry learned last week (Dec 14) that government expects offshore wind, which has been on a cost-cutting journey like no other in the past decade, to become even cheaper in 2023’s clean power auctions. That pressure, fuelled by a desire to cut consumer bills, is actually likely to do the opposite, repelling investors and hampering the deployment of low-cost renewable energy at exactly the time we need it most.

It may seem right now as if there is no easy answer to the energy affordability crisis we all face. But if, as we all know, the long-term solution to this problem is cheap, clean renewable energy capacity, then the UK Government should be doing everything in its power to protect our country’s reputation as one of the leading destinations in the world for renewable energy investment.