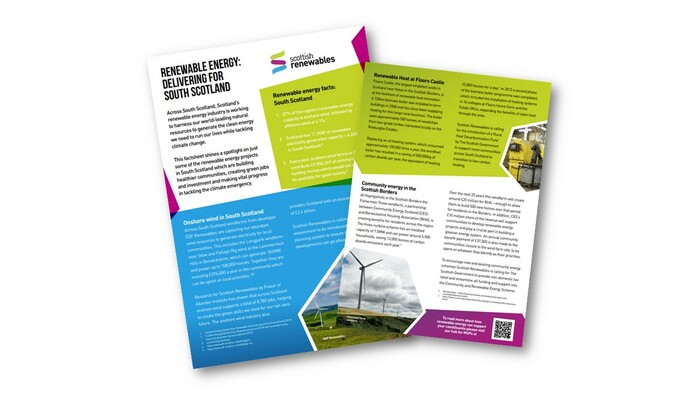 Renewable energy’s benefits to Scotland’s regions are highlighted in a series of factsheets launched ahead of May’s local government elections.

The documents, from industry body Scottish Renewables, set our how much renewable energy is located in each Scottish Parliamentary region, as well as the value of voluntary community benefit payments made to local causes there by the green energy industry.

Also featured are a series of case studies looking at renewable energy technologies from hydropower to wind and low-carbon heat projects.

Claire Mack, Chief Executive of Scottish Renewables, told how the documents “paint a rich picture of how our industry is working across Scotland”. She said:

“With May’s local government elections on the horizon we felt it was important to highlight the local benefits which renewables bring to Scotland’s varied regions.

“Local authorities have an important role to play as we tackle the climate emergency. For our industry that often means using their planning powers to enable development which reduces carbon, both in terms of electricity generation and low-carbon heat.

“From the Borders to our islands, green energy projects are not just providing clean power and heat, they’re also bringing well-paid jobs and millions of pounds of investment to remote regions which may otherwise rely on seasonal income.

“We know that each gigawatt of renewable energy which is built creates 1,500 jobs and that each of those jobs creates £89,000 for the Scottish economy, so the benefits of building more renewable energy, which we need to meet our climate change targets, are clear.

“These eight factsheets paint a rich picture of how our industry is working across Scotland and we hope that the parties campaigning in May’s elections can use them to understand what our industry is bringing to their area.”

The documents are also released ahead of Scottish Renewables’ Net-Zero Energy Conference, which is being held in Edinburgh on March 23. It will look at how Scotland can build the renewable energy projects needed to meet its 2045 net-zero carbon emissions target.

“The Scottish Renewables Net-Zero Conference 2022 is an ideal forum to discuss the future of renewable energy in Scotland, and EDF Renewables is proud to be the Headline Sponsor of this important event.

“Building a diverse range of projects that take advantage of the full range of renewable resources on offer across Scotland will bring huge benefits. It will build resilience into our energy system, create skilled jobs and help Scotland become a net-zero nation.

“With our ten operational onshore wind farms and another 500MW in construction, we have plans to invest much more in the future to meet demand and confront the climate change emergency.”